We're Getting Mutants in the MCU - The Loop

Raven is a female Immortal with short brown hair and green eyes.

Although not mentioned by name, she is first seen glaring at Lotus after her initiation, implying she doesn't trust the newcomer. She later is described as a "glaring scarred lady" by Lotus, and Blaze mentions how Raven doesn't trust newcomers, especially those who haven't underwent training. However, Blaze assures Lotus that Raven will warm up to her with time.

All that is written here has been confirmed by the writers of The Immortals. 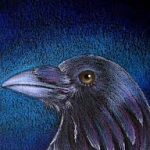